This is part 1 of the FPL managers who contribute to the FFGeek site with good histories who show their teams each week. This will give people a feel for what other managers are doing. It’s a fairly informal thing with no obligation on anyone and these teams may change at anytime before the deadline without further notice. It won’t cover transfers in real time either. It’s just to give an idea of the trends for the week no more.  The teams are shown as their “final-ish” teams so they could change.  Where they have twitter accounts I have shown this and they may update them there or on our Slack Channel which is part of our subscription Patreon site but this is not guaranteed

So GW1 score of 60 was disappointing. Captain call, as often is the case, was the difference. Like many have said it wasn’t a stupid call and on that basis improvement on some of my previous captain fails.

Onto GW2 and I’m sticking with my plan of Salah to Rashford, which gives me £3m in the bank. Digne next three fixtures look great and as I can’t see me having a spare transfer to bring him in I’ve taken the hit, putting in faith he can outscore Dier by over 4 points in the next three. Did the move early on Thursday night with Digne price rising – if I’m taking a hit I’d like the financial gain too.

Captain Aubameyang. Head down tomorrow, hoping no injury news impacting on my team

Transfer summary:  Salah out Rashford in.  Dier out Digne in -4 points

Here’s the team with the transfers completed 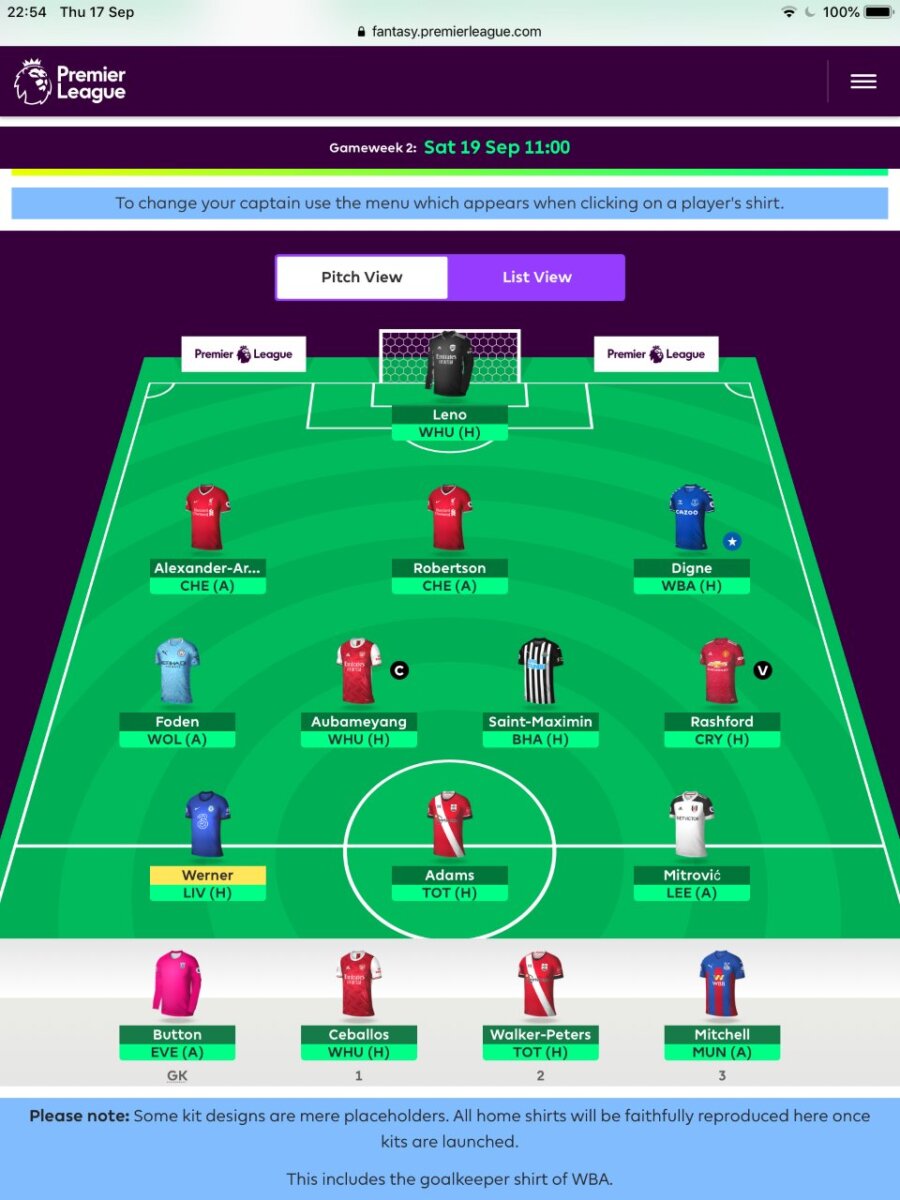 A so-so first gameweek which had some welcome surprises in the shape of a Mitchell clean sheet and a Wilson goal, but some real disappointments that are already shaping up as big problems. I’m looking at you, Trent Alexander Arnold, Saliba, Davies and Mitrovic.

I’m annoyed in that I was desperately close to putting the armband on Salah, but played it safe and went with the poll favourite, Aubameyang. A lesson in going with your hunch.

My priority, though, has been to bring in Bruno ahead of United’s first fixture. I had budgeted for this and therefore actioned my transfer of Son to Fernandes earlier in the week, before price movements ruled it out.

I may just be a bit reckless and take a hit to sort out an issue in defence (I definitely got this area wrong going into GW1). Particularly as I am a little concerned about whether or not I will get 3 of my defenders actually playing. I could, for example, move Davies to Justin or even a Jamal Lewis.

Captaincy is a tricky one this week. I don’t really have a hunch and therefore will likely leave it on Aubameyang, who is in form and should be in good spirits following his contract extension.

Best of luck to you all!

Here’s the team with the transfer complete

I’ve covered my team in more detail on this week’s FFGeek Podcast which is available here to our Patreon subscribers but the nuts and bolts of it are that I got my 50/50 Captain call right by going Salah, but the rest of my 50/50 calls around this wrong. I’m certainly not going to complain about a 40 point Captain haul for GW1 though and there were other positives in that Calvert-Lewin looks a good acquisition in an Everton team that impressed and Werner started FPL life with an assist.

Salah’s haul has certainly left me with a pleasant dilemma – my pre-season plan had been to jump straight off Salah and onto Fernandes this week, but I’ve shelved that idea on the basis of his GW1 performance. He looked sharp and certainly ticked the boxes in terms of both the eye and stats tests. As such, I’ll be adapting my strategy and I’ll explore my options below.

My initial concerns this week revolve around Spurs, Saints and having no Man United cover. I’m happy to hold off City until GW3 where Aubameyang will then be moved on for De Bruyne or Sterling. Saints I thought were a little unlucky as if Palace hadn’t scored early the game would have take on a different complex so I’m happy to wait on them for the moment. Walker-Peters certainly took on a very advanced position so this bodes well for attacking returns at least moving forward. It may also bode well for the visiting Son this week, though I’m watching this one closely as a certain Gareth Bale may be arriving soon which could change or even threaten Son’s position somewhat.

As for Man United, Fernandes (my favoured Man U asset) is now out of reach on a free transfer as I’m not selling Salah or Aubameyang (Captain favourite this week) and I’m 0.5m short of changing him for Son. Rashford is an option though as a Son replacement. Another idea I’m toying with is to change Son for James Rodriguez. This frees up another 1.5m which would leave Jimenez and even Martial within reach instead of Adams next week on a -4 combined with Aubameyang going for my City cover.

The other option is to carry my free and give me the luxury of 2 frees next week – at the moment I’m just not sure! I think if it looks like the United and City players are price locked (which rumour is speculating they might me) I’ll hold and then I can do Auba and Son to De Bruyne/Sterling and Bruno Fernandes next week.

For my team this week, Aubameyang should be heavily favoured for the captaincy and for good reason. He’s in good form and West Ham were pretty awful in GW1 so I fancy his chances for a decent haul – he’ll be getting the armband this week. Elsewhere, I’ll probably have to suck up a bit of pain this week with Saints versus Spurs and Liverpool v Chelsea so I’m not expecting a big score. This is a week I guess for trying not to slip back too far and then kick on in GW3 with 2 free transfers.

Good luck folks and may your arrows be green!

Here’s the team assuming no transfers are made 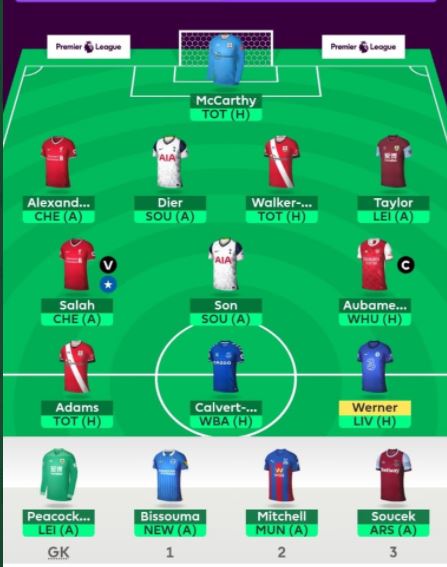 Best not to talk about GW1 and look to the future…

My original plan was to roll the transfer to have more options next week. However, Alli is a problem especially because he was left out of the squad for the Europa league game. This could either mean he is nailed to play against Southampton or Mourinho has lost faith in him, so I am in 2 minds on what to do; stick or twist. My instincts are telling me to give him 1 more chance.

I did not see Everton starting the season this strongly and Digne has really caught my eye. I am trying to differentiate between the Everton fan in me and the FPL manager in me. Trent worried me against Leeds and Liverpool now have 2 tricky fixtures where clean sheets look unlikely. On the other hand Everton have 2 very nice looking fixtures where clean sheets are very likely. Taking attacking returns out of it, I believe Digne outscores Trent. But….Trent is Trent and can easily bang in a free kick and grab an assist from a corner. On the other hand, so can Digne!!!

I also have the yellow flag on Werner which does not seem serious but I need to wait and see what comes out of the press conferences regarding his fitness.

My options appear to be as follows…1) take Alli out for James Rodriguez, 2) take Trent out for Digne, 3) take Werner out (if 100% injured) for Jimenez/Calvert-Lewin, or 4) do absolutely nothing! A -4 is out of the question this week but possibly could happen next week.

I am leaning towards option 2 which is a very bold move taking Trent out but I could easily bring him back in for the Villa game GW4 where the Liverpool fixtures improve (minus the Merseyside Derby if course!) This would also eliminate Werner playing against Trent in my team which limits the points potential of the other if 1 scores.

Captain is Aubameyang and this will not change. Here is the team prior to any transfers.

Transfer summary:  To be confirmed

Here is the team prior to any transfers being made

The highlighted FFGeek contributors combined team finished with an overall rank of 52k last season is going well in 3rd equal place with 73 points, 638k overall rank. You can follow that team, including live transfers, on our subscription Patreon site. 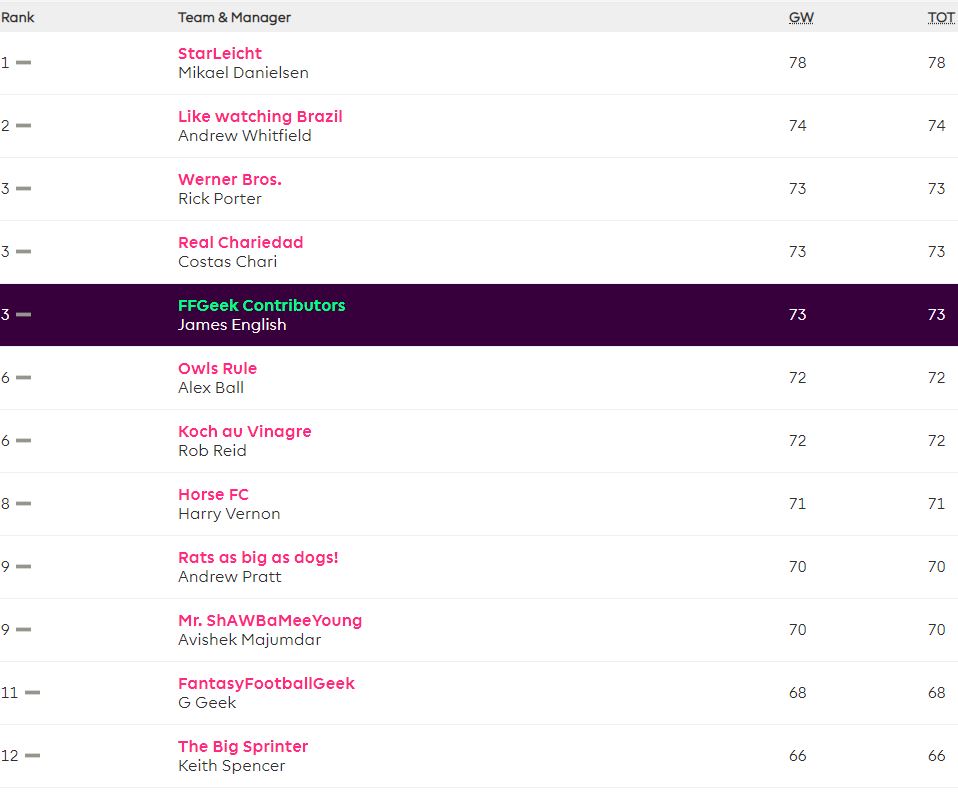 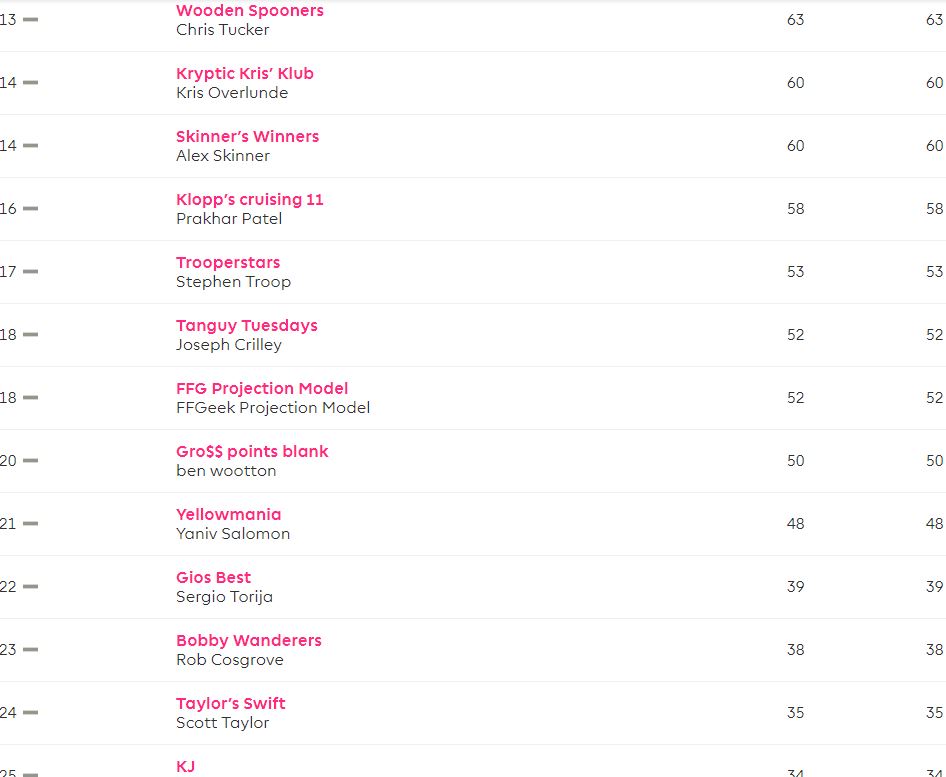